Last year, a lawsuit was filed in New York City asking the court to compel the City of New York, the NYPD, and the Dept. of Health to enforce the fifteen or more laws that are violated during a religious ritual known as Kaporos.  Kaporos is a Jewish ritual that involves the swinging of live chickens over one’s head, and then slitting the chicken’s throat and bleeding her out.  The idea behind the ritual is that the individual’s sins will somehow be atoned with this practice.  A chant such as, “We ask of G‑d that if we were destined to be the recipients of harsh decrees in the new year, may they be transferred to this chicken….” is recited.

It is claimed that the dead birds are donated to the poor, although this claim has been refuted with video and photographic evidence, which depicts dead and dying birds being thrown in black trash bags, which sit on the streets while waiting for the  NYC Sanitation Department to cart them away.

The practice involves makeshift illegal slaughterhouses being erected on public streets; it causes a serious health risk, creates disgusting conditions in the neighborhoods, including blood, feces, and feathers littering the streets, and of course, involves horrific animal cruelty.  The request of the court to mandate enforcement of the fifteen laws that this ritual violates was denied. An appeal has been filed. 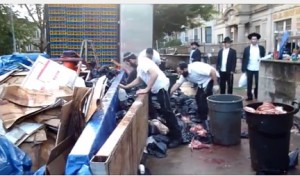 The lawsuit stated, “The event completely takes over the public streets and a carnival-like atmosphere of bloody violence and unhealthy contamination proliferates entire neighborhoods.”  The idea that this type of bloody violent “ritual”, one that involves brutal animal slaughter and sacrifice, is taking place on the streets of New York City in 2016 is astonishing.  What is even more astonishing is that the city agencies entrusted to enforce the laws that this event violates, all look the other way.

The idea of seeking atonement or forgiveness from one’s God, by torturing another one of God’s living, breathing, feeling beings, is ironic, at best, and sadistic, at worst.  This tradition basically gives the practitioner permission to act poorly all year, with the intent of receiving forgiveness by this one bloody ritual, which tortures another living being.  Yet, the ritual itself, in reality, is in effect an additional sin. 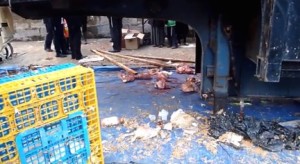 From where did this idea originate – that humans can have a green light to behave badly, as  long as they engage in one brutal act towards an innocent being at the end of the year?  From where did the notion emerge, that all will be forgiven by “sacrificing” (and in effect, torturing and killing) another being?  Isn’t this, in reality, merely a way of dodging and avoiding our own responsibility for our own actions, by pretending that we can absolve ourselves through some barbaric act, that is merely just another example of even worse behavior?

The purpose of animal sacrifice is to offer an animal to appease or maintain favor with a deity.  But what type of deity would be pleased by this?  Surely, this is counter-intuitive.  Yet the Bible and other religious writings are full of violence, murder, and sacrifice of both animals and humans.  And yet this is what we worship; so there can be no surprise that our world is filled with continued violence, murder, and sacrifice, from simple street disagreements to large scale wars.  What this truly demonstrates is an utter lack of respect for life and a total void of compassion.  If there must always be “sacrifices”  of the bloody nature, and these murders can be justified, we will never truly understand what it is to live a noble life. 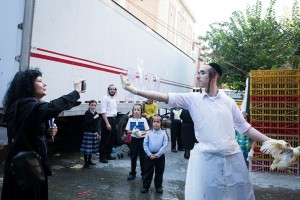 Humans will never evolve until we reassess what it is that we worship.  One cannot advocate for compassion and kindness, while at the same time, advocate for bloody animal sacrifice.  It is an oxymoron.   One annual act of animal sacrifice will never erase our bad behavior for the previous year, yet certain sects kid themselves into believing it will.  This is a cowardly and easy way out, one that will never encourage a truly sinless life.

Please join us in protesting these cruel acts at one of our three rally events. You can find more information about these events here.