Anita Krajnc Prosecuted for an Act of Compassion

What kind of society do we live in, where one who shows compassion – pure compassion, with nothing to gain for herself – is prosecuted? This is a rhetorical question, of course, but one that people are starting to ask.

This is in response to the trial of Anita Krajnc, who is being prosecuted for criminal mischief, following an act of compassion where she tried to give thirsty and dehydrated pigs — who were trapped in a cramped steamy hot metal truck on a scorching day, as they were hauled to deaths —  some water. 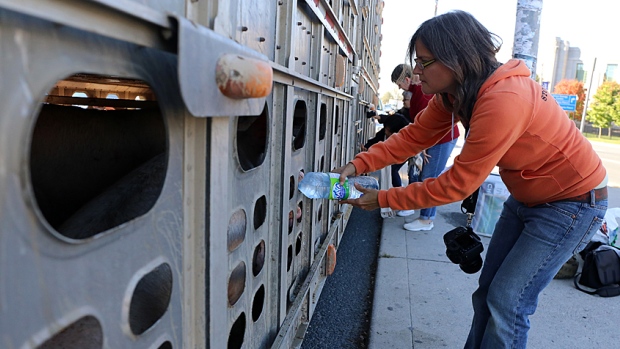 The bigger question is, why are these pigs trapped like this in the first place. One of the things the driver said to Ms. Krajnc, was that “they aren’t humans.” The animal agriculture industry has responded to this story by saying that the pigs were being transported “according to industry standards”.

So, according to the driver, and the industry, these animals do not deserve compassion, kindness, the most minimal comfort, or even water. This is the attitude that needs to change in our society. Now.

Humans have somehow developed this sense of unilateral and exclusive self-entitlement – that WE are the only species that are worthy of our basic needs being met. Only WE have the right to have our stomachs filled, our thirst quenched or be comfortable.

It amazes me how many ads are around regarding our quest for ultimate comfort –  the quest for pleasant sleep and leisure comfort is unending. More leg room on flights – the perfect mattress – ideal temperature control. After all, we “deserve” it. But according to society, we are the ONLY ones who deserve it – those pigs, cramped in a metal truck, on a scorching day, deprived of something as basic as water, do not.

It is acceptable that they were so thirsty that, it has been reported, some were foaming at the mouth and hyperventilating. It is acceptable because the transport meets “industry standards.”   And Ms. Krajnc, according to the law, had no legal right to intervene. She did, however, feel that she had a moral obligation. And she was then prosecuted for that.

Obviously, these alleged “standards” need to change. Our unilateral and exclusive sense of self-entitlement needs to expand to others. Pigs are highly intelligent, emotional, sensitive, and gentle beings, who clearly are as sentient as any human.

As most all animals are. Animals are intrinsically similar to humans in every aspect that matters.  They love. They cry. They have families. They vehemently protect their babies. They like to play.  They enjoy leisure time. They have friends. They like to be comfortable. They experience joy, and they can suffer. They just speak a different language that we do not understand.

We, in our arrogance, seem to think that just because that language is different than ours, then somehow that negates all of their other similarities. This is incredibly short-sighted, or perhaps convenient, for it allows us to excuse our deplorable treatment of them.

We need to retire this antiquated barbaric and selfish attitude. We need to reward those among us like Anita Krajnc, who stood up for compassion, and make her a role model – not prosecute her for a crime. Until we do, there is something very wrong with our culture and our world.

Email updates and news right in your inbox.

Every donation counts. You help successfully fund our projects.