Animals Are Not Art: Protesting Duke Riley’s Fly by Night

Pigeons are almost as synonymous with New York City as food carts or the Empire State Building, yet, we have to remember that these are living beings that need to be respected and taken care of.

A recent art exhibit at the Brooklyn Waterfront saw a NYC artist using pigeons as the medium. This prompted the Animal Cruelty Exposure Fund to immediately take action and denounce the project. Animal cruelty and abuse cannot be tolerated regardless if humans consider it art or not.

Duke Riley, an artist and resident of Brooklyn, took to strapping a pair of LED lights to pigeons for an art show that took place from May 7th to June 19th titled “Fly By Night.”

Over 2,000 pigeons were used as part of the exhibit which consisted of a light show using the pigeons at night. During the twilight hours of the night, Duke proceeded to keep these pigeons in continuous flight by using a flag to stir them from going back to the ground.

This act is something that directly oppose their natural behavior and can produce fear, which is what keeps the pigeons in flight.

Pigeons are daytime creatures that have poor vision in the dark and can become easily disoriented. Attaching LED lights to a pigeon’s leg and forcing it to fly at night time creates the risk of disorienting the pigeon and sending it crashing into the ground or into other objects.

In this case, the exhibit was over a river which increased the risk of drowning for the birds.

Furthermore, the pigeons which attempted to land back down were antagonized by a long pole that Riley used in order to get them in the air again. This, in turn, had the potential of causing the birds to go frantic and given their poor vision, increased their chance of injury or death.

Once news of this exhibit reached the public, there were many who took to the exhibit location to protest, including the Animal Cruelty Exposure Fund and Their Turn, a movement run by ACEF supporter Donny Moss.

Lined up by the dozens, protesters peacefully showed that using these animals outside of their natural capabilities for the sake of art was not acceptable.

To repeat, the use of animals beyond their natural capabilities for the sake of art is an act of animal abuse, no matter how pretty or “artistic” the outcome may be. 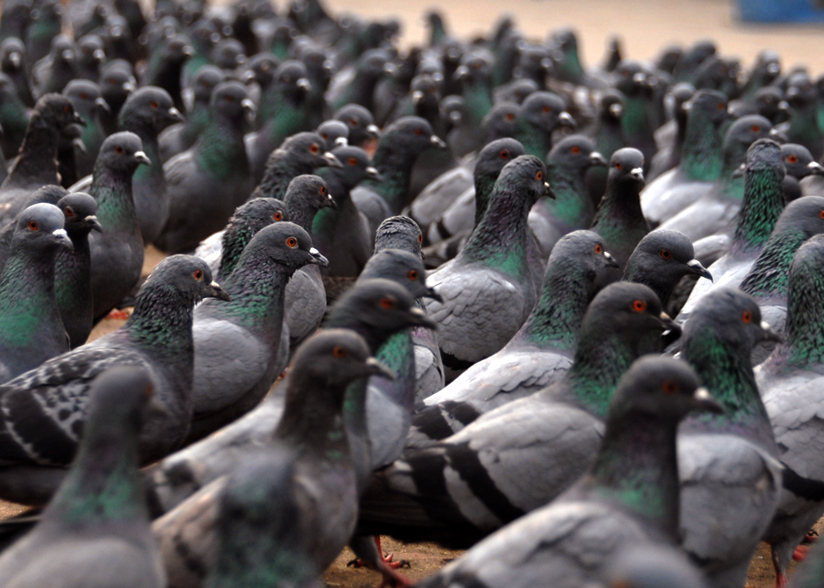 ACEF Founder Nora Constance Marino, who personally protested at the exhibit, weighed in on it, “There’s plenty of ways to create beautiful art without using unwilling participants who are forced to perform.”

Members of the Urban Wildlife Coalition were also staged outside to protest the show. In the defense of animals, no matter how small, who have no voice, it is up to ACEF and the rest of us to give them one.

Following the examples set by SeaWorld and Ringling Bros. to stop using orcas and elephants in their shows, we are calling to prohibit this kind of activity from happening in the future again.

The solution is taking action, such as the ones taken by the protesters who gathered. Because of these actions, over 6,000 signatures were collected to take the exhibit down.

What Can You Do?

You can start to monitor inhumane animal handling by paying attention. You can also:

Visit us at our projects page to see a list of projects and become a part of the solution. You can also donate to the cause.

Visit the petition letter to stop the Fly By Night exhibition, although it closed, to see the impact of a group of people taking action.

Check out other resources like The Humane Society, Their Turn, and others listed on our site to learn how you can take action and fight against animal cruelty.